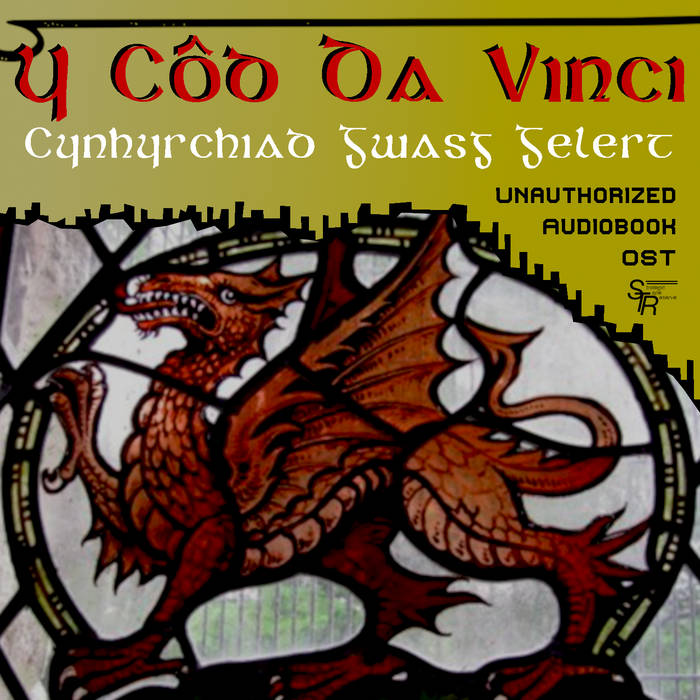 Though their numbers have decreased in recent years, it's not uncommon to encounter hawkers along the promenades of the more popular Welsh holiday destinations selling knock-off rugby merchandise, fake designer sunglasses, and bootleg tapes and CDs. Among the music, you'll typically find a smattering of the recent chart toppers, a couple of U2/Coldplay albums, as well as classics such as Celine Dion or Tom Jones. And somewhere nestled within this pile of illegally-dubbed pop you will probably see something different, something you wouldn't find in any chain music store or online streaming service: the Welsh-language audiobook of Dan Brown's The Da Vinci Code. Brown's best-seller has been officially published in over 40 languages, none of which are the Celtic tongue spoken primarily in western Great Britain and Patagonia. The story of how this audiobook version became a ubiquitous item of Welsh vacation contraband is shrouded in the sort of mystery which might require the famous American symbologist from Harvard University, John Langdon, to uncover.

Let's turn our timepieces back to the early 2000s. Wales has recently been granted greater autonomy in the referendum on devolution, but did it go far enough? Many people would say, “Na!” Among the dissatisfied were a group of students at Aberystwyth University, a notable hot-bed of both media production and Welsh nationalism. As Gwasg Gelert (Gelert Press), they used their access to the University's media studio facilities to produce high-quality bootleg music albums which would be sold on to criminal gangs to distribute throughout Wales and even some of the smaller Cornwall and Devon resorts which weren't run by the Portsmouth firms. The money they earned from music-counterfeiting was mostly used to support a gentle form of activism, primarily printing pro-independence leaflets to hand out to shoppers on Great Darkgate Street.

However, around Autumn 2004, the status quo shifted, as Gwasg Gelert began moving some of their bootlegs via a crew from Llandudno whose ranks included former Welsh Socialist Republican Army and Meibion Glyndŵr members who had spent the 1980s committing acts of arson against what they saw as symbols of English occupation. According to the terms of their distribution agreement, Britpop, traditionally the cash-cow of the operation, would no longer be included among the Gwasg Gelert contraband portfolio, as behind the jangly guitars lurked an imperialist ideology they did not wish to promote. Despite this, ripped Oasis, Blur and Suede CDs were still in high demand along the Cambrian coastline, and their exclusion from the supply chain irked many of the other gangs Gelert sold to, especially those with Welsh Unionist leanings. The situation rapidly worsened as revenues fell. A campaign of intimidation and reprisals ensued, the final straw of which was an MI5 raid on the studio, in which several of the student-bootleggers were arrested, essentially bringing this chapter of Gwasg Gelert's activities to a sudden close.

Those who weren't apprehended fled, some abroad, to Argentina or Spain's notorious Costa del Crime to allow “things to cool off for a little while” before reconvening at an Ebbw Vale safehouse in Spring 2005 to plot their next move. Returning from different points on the globe, they had each noticed a singular, constant trend. On the playas of Torremolinos, in the Träkál bars of Trelew and the packed MetroWest commuter trains around Bristol, everyone, everywhere, was reading The Da Vinci Code. The global phenomenon presented Gwasg Gelert with an opportunity to re-enter the illicit audio market with a product whose engaging, conspiracy-heavy narrative could help reignite the passion for Welsh sovereignty. As no authorized Welsh-language version of the material existed, the former students began the laborious task of translating from the original English text. Toiling under 16 hour shifts in the front sitting room of the safehouse, they produced a rough, but workable script in just under three weeks. After a marathon recording session in a secret studio in the the basement of the Welsh Assembly building in Cardiff, accessed with the aid of sympathetic Plaid Cymru affiliates, the 19 hours of audio were loaded onto CDs and cassettes and trafficked to resort areas, where they sold out in a matter of days.

Welsh-speaking holiday-makers were gripped by the mystery thriller and the parallels between the nefarious factions in the fictional Vatican and real-life London were immediately obvious to most. Though it wasn't reported by national media outlets, Welsh Nationalism surged towards the end of the 2000s. Second and third editions were later produced, some of the content re-recorded with greater emphasis on comical accents and, breaking with traditional audiobook conventions, an original soundtrack was composed for the work, additions which only served to increase the illicit product’s popularity. The content was also being shared on the internet, using torrent technologies which could transfer vast quantities of data all the way across Wales in only a few hours.

Unfortunately, so much acclaim also brought less desirable forms of attention. Scuffles broke out after Unionist thugs attempted, in broad daylight, to use magnets to destroy a consignment of the cassettes enroute to Portmeirion. BBC Wales carried out a disinformation campaign in which telegenic Oxbridge personalities questioned the historical accuracy of some of Brown’s plot devices. HM Revenue and Customs stepped up checks on hawkers, specifically to confiscate Gelert's successful samizdat, and GCHQ implemented UK-wide content filters which eliminated Y Côd Da Vinci from all but the darkest of web. Despite all of that, the unauthorized audiobook remains popular up to today.

After the British referendum on EU membership in 2016, a hostile climate of political instability again forced Gwasg Gelert into hiding. So far, supplies of Y Côd Da Vinci have remained sufficient in seaside resorts. But for how long? Last autumn, an unmarked A3 padded envelope was thrown into the STR forecourt by moped driver whose features were obscured under a modified scrum cap. The labeling on the 20 compact disks cocooned within the bubblewrap described them as the fourth edition of the unlicensed hörbuch. With no instruction or contractual framework regarding the wishes of the unauthorised rights-holders of the material, we have decided to release excerpts of the audiobook including the full soundtrack to ensure this vital artifact, a beacon of mysterious hope, survives what could be the next dark age.

Our most profound appreciation goes out to Geraint O. Edwards, Curator of Forensic Musicology at Sain Ffagan Museum, a truly John Langdon-like figure, without whom all of this would remain enshrouded in mystery.

The Strategic Tape Reserve, headquartered in Cologne, West Germany, is a fully independent (non-aligned, secular) organization dedicated to the dissemination and responsible management of ferric cassette material and content.

Bandcamp Daily  your guide to the world of Bandcamp

Cannibal Corpse's George "Corpsegrinder" Fisher stops by for an interview